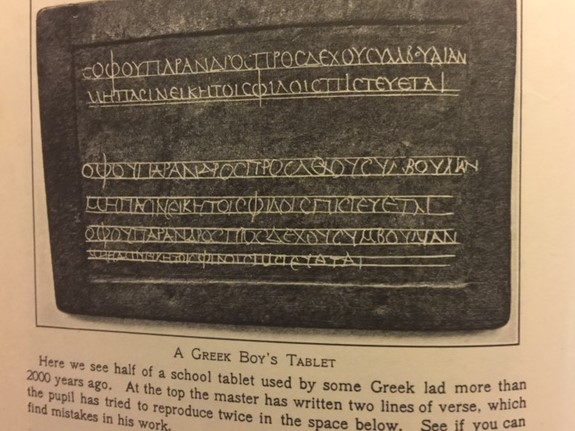 Some of you might be wondering why the story has Classical Greek in it. In fact, this kind of Greek is used in Homer’s Iliad & Odyssey, a testament to the enduring quality of this language.

Greek was the lingua franca of the 1st century A.D. Due to the conquests of Alexander the Great, the language was the means by which different cultures could communicate, much like English is today.

However, many of our writing conventions had not yet been established.  This tablet shows that in ancient Greece, letters were often written  without spaces in between words. This is primarily because nothing was written that was not meant to be read aloud. Principally, the reader would be able to sort out the sounds and then speak the words aloud.

No punctuation was put into words until reading silently became important, which developed for English in Victorian England. Of course, this happened at different dates for different cultures.

I consider Classical and its later counterpart Koiné Greek ( the language of the New Testament) to be a magical language that has since been forgotten by a generation of English speakers who have forgotten in large part how important this culture has been in shaping our own.

My current Greek textbook calls Christianity the “last great achievement of classical civilization.” I think this is true in large part. Although this language is very hard for young people to learn, I do think it is possible. My son has learned the Greek alphabet by replacing the Greek characters in the ‘abc’ song.