It became obvious that the longer they were entertained by Jongleur, the less chance that there was that they would learn Eyrrfish. Actually, Jongleur was the purveyor of the wildest and  most absurd ideas. Sometimes, they would call him out on his buffoonery, and he would respond with : “Capital!”

They pored over manuscripts of the Eyrrfish language, depending on Jongleur to translate. It didn’t quite make sense, but they continued to make a reasonable effort at translating the language. The problem was that without Dr. Unne, they couldn’t make heads or tails out of what they were reading.

They were outspoken about their approval of his methods, but there were so many problems. The clockwork owl kept circling above their heads and screeching in French, “Veuillez boire du bon café!” It was most unsettling. There were so many texts before them, that they began to be confused as if the papers were a twisted gyre of nonsense.

Over time, they had begun to make something of Jongleur’s encrypted code. They noticed that it was connected to his explanation of Koine Greek. ‘Α’ or ‘alpha’ signified the beginning of the code chain, and of course, ‘Ω’ or ‘omega’ was the end of it. In between they saw that each letter of the Greek alphabet corresponded to a separate idea.

The code-breakers eventually saw that this could be the way to find Brad. They would trick Jongleur into revealing the location of Brad, and then, see to it that the Eyrrfish language was translated into plain English. Afterwards, they would give the locket to Brad, and then leave for the Cardia Islands.

At that point, it would be necessary for Poxig to return to Ulteria, with the idea of getting the sacred amethyst, which would allow him to pass unharmed to Elrick the half-prince’s domain. He would regain his composure, and take Lakfi just until the border. 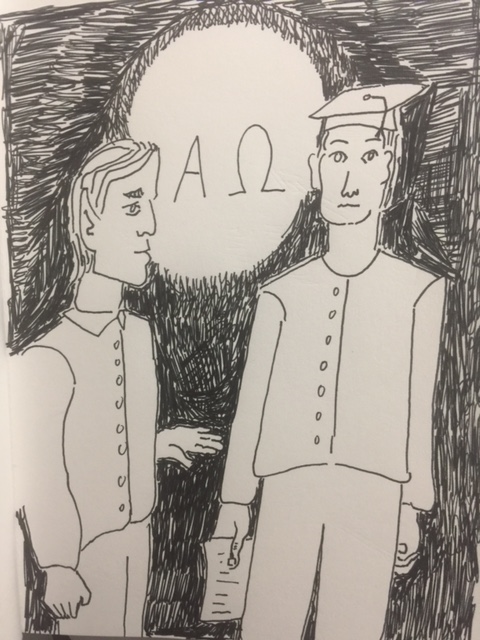