They had arrived at Mount Crump after a long, slow journey. Lakfi’s hands were gnarled after riding the horse all night. Poxig was also exhausted. But they had crossed the border to Ulteria shortly after dawn, and now they had reached the end of the Rivula River, where it flows into the sea.

The suzukib birds were chirruping, and there was little fanfare at their arrival. They would now have to scale the mountain as best as they could. They began their ascent to the library on the top of the summit. They walked, crawled, and scaled up the crags that led to the survey tower that was visible next to the library, which was carved into the side of the mountain.

Poxig could not help but propose some philosophical question or another, since there was plenty of time to expend. “Have you ever noticed,” he said, “that the same senses that we use to perceive the world is also what we use in dreams?”

“Then, how can we tell the difference between dreams and reality? Could not our senses be misleading us?”

“Dreams will be our only hope of getting the Eyrrfish document,” said Lakfi.

“Ah yes. We must answer the riddle,” replied Poxig.

They came to the entrance of the library,  which was festooned with columns and draperies. They noticed that not many people were there, but just a few Ulterians around the area.

“Have you been here?” asked Poxig.

“It was a long time ago during my apprenticeship,” replied Lakfi. “I think that it will be difficult to meet the head sage and librarian, Jongleur. Hopefully, our letter has reached him.”

As they approached the library, a clockwork owl flew up to them and began to speak in a robotic voice: “WHAT IS YOUR BUSINESS?”

“We are here to see Jongleur,” said the green-faced elf. “Is he in?”

“MASTER DOES NOT SEE VISITORS.”

“MASTER …MASTER… MASTER…” at that point, the clockwork owl fell to the ground and began twitching.

A man in a coxcomb emerged from the library. “Oh, darn it! It seems that my sentry has malfunctioned,” he said.

“Excuse me, but might you be Jongleur? We are looking for him,” asked Poxig.

“Aha! Yes, that is me. You have found me. But I must say, how did you get this far? The Ulterian guards should have stopped you.”

“We evaded them by the pass by the Rivula near the Ulterian border. Lakfi cast a cloak spell that allowed us to pass undetected,” said Poxig.

“Have I received correspondence from you?” asked Jongleur. “As you well know, I don’t entertain guests that I don’t have any missive from.”

“You must have something from us!” said Poxig in an elated tone. “We sent the letter several months beforehand.”

Jongleur began to fuss with his papers in a large leather knapsack. He pulled out a long letter with a red seal on it. “Ah yes, this must be yours,” he said.

“However,” he added, “you must understand that no one may enter the library before they answer a riddle.”

Lakfi thought himself very good at these sort of idealistic mind experiments. “This shouldn’t be too hard,” he whispered to himself.

“Very well, let’s begin.  What ceases to be the very moment it is spoken?” asked Jongleur.

“Ah yes!” the fool on the hill laughed with delight. He did a back somersault and then shouted, “that’s absolutely right!”

“I have another one…” Jongleur began,  but Lakfi interrupted.

“You said that we should only have to answer one! Our business is pressing. We must gain the translation document for the Eyrrfish language. We sent you the letter in April,” said Lakfi.

“Ah yes, it is April,  the cruelest month. And you, sirs,  are out of luck. One such individual has borrowed that document from me. His name is Brad, and he lives just beyond the Ulterian border.”

“You tricked us!” yelled Poxig.  “You led us to believe…”

“You have come here on your own,” said Jongleur. “I had nothing to do with it. I make sure the documents are in order, but otherwise, it was all of your own devices.”

“Then,  can you at least inform us as to Brad’s whereabouts?” said Lakfi.

“Well, I never give out the patron’s information. I only have about 200 of them. I rarely get visitors on the top of Mount Crump. But since you answered my riddle, please come inside, and I will tell you about some of my most recent research,” said Jongleur.

The trio went inside the great library together as dusk was falling. 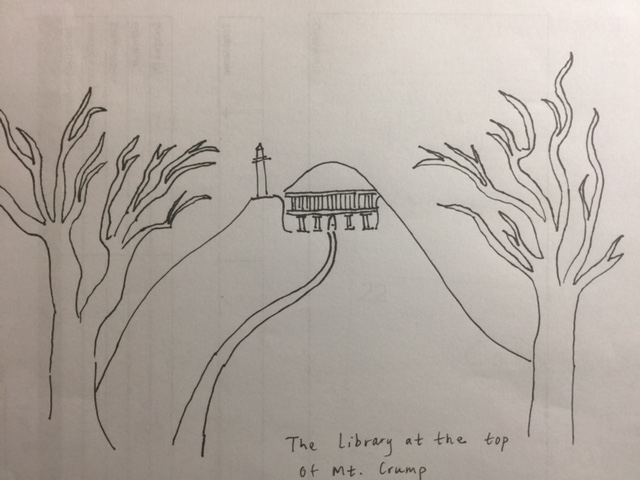